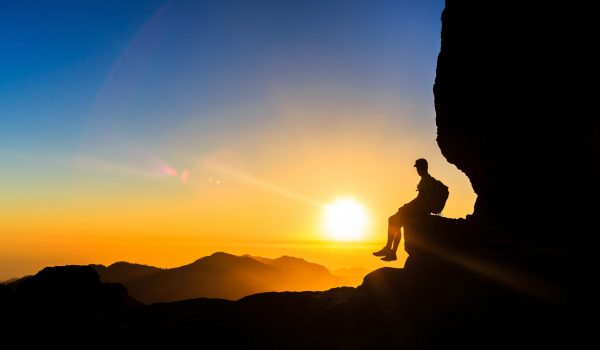 I’ve been driven, or maybe plagued, by an inner desire to achieve success my entire life. Well, the projected image of success anyway. I have followed a frustrating and challenging pathway through my home life and professional career and have always managed to retain an (overly) optimistic view and an almost clear path to what I want to achieve.

The problem is, it’s been the wrong goal.

I grew up in a relatively impoverished East End of London. Don’t get me wrong we always had just enough to be part of a social environment built on the image of success, being money and materials things, but we were never comfortable. I had a very poor education and through changing schools twice ended up just going through the motions for the last two years of it.

I’ve worked pretty much since I was 15 and experienced a variety of roles from a street trader to Disney steam train driver, travel agent, carpet fitter, mechanic, charity fundraiser, car hire advisor, doorman and salesperson. Throughout all of these I’ve held onto a sense that through hard work and self-education I will find the success I’m looking for.

Well that was until a few years ago.

In 2002 I started my own ‘lifestyle’ business. I have practised martial arts in one form or another since the age of 8 and was heavily dedicated throughout my youth to the point of competing in several world championships as part of the GB Wushu Team. After spending some time gaining knowledge of how to run a successful business, I decided it was time to change my life and I opened a dedicated martial arts gym. The gym was a two-storey building in Blackpool and consisted of a reception area/shop, changing rooms and showers, 2 training rooms and a collection of dedicated martial arts equipment. The gym was far ahead of its time as there were few dedicated full-time martial arts gyms around at that point.

Although the gym was a great place to be, it struggled as a business and without the right financing from the start I was unable to make it work. Late 2004 I was forced, partly through financing and partly through a growing issue with my knee (I later went onto have a Total Knee Replacement), I was forced to close it down and go through a bankruptcy process.

This was probably my lowest point. My eternal optimism had been knocked and I found myself with nothing. My marriage had broken down around the same time and I was left in a dark place.

It was at that time a friend of mine gave me a book. She had been through dark times previously and told me this book had given her a new direction. Now I’m not one for turning to other peoples published thoughts to drive my own motivation, but I decided to read it.

The Way of the Peaceful Warrior by Dan Millman. This book has an unusual story and without going into too much detail, it maps out the struggle of a gymnast who, through injury, could no longer pursue his dreams and loses his direction in life. I found this easy to align myself with. Through the intervention of a mentor, he is slowly directed towards a better understanding of his own values and the book truly did offer me a new perspective.

In simple terms it describes the equation for happiness. As someone whose happiness is directly tied to my own sense of success and personal achievement, this equation has given me a formula to find my success, recognise its value and draw down an unlimited supply of operational satisfaction through its application.

If your expectations are set way above your reality, I want to be a millionaire for example, then you are not only unlikely to achieve it, but you are also destined to take yourself on a journey full of disappointment and failure. If, however, your expectations are set against goals that are fully achievable, then you will live in a world of constant success. For example by changing the expectation of becoming a millionaire to a more simpler step towards that goal, then not only will you be more likely to achieve that goal and therefore enjoy the success of it, but you will also put yourself one step closer to the chance of being a millionaire.

If your expectation becomes – I want to work harder today than yesterday, I want to engage with more people than I did yesterday, I want to improve the quality of my relationships with specific people around me – then those goals can be much more easily achieved. You’ll have a successful day and if you string enough of these successful (and enjoyable) days together, not only will you start to have a much more satisfying week/ month/ quarter or year, but you’ll also find that your whole outlook on success will change.

I’ve often had discussions about what success looks like, it’s part of my job. What I often end up talking about is not the goal but the journey. We often focus so much on the goal that we don’t get to enjoy the journey. So, focussed on the future that we forget to live in the present, the ‘Here and Now’.

I work alongside a large number of business owners, managers and professionals who are all targeted, driven and focussed on a forever increasing target (usually sales or revenue). Through the online coaching programmes and training we deliver, we focus heavily on action planning, creating SMART goals and then measuring the activity required to achieve them. What I try to do is help them realise and focus on the small wins. The big wins will come along when it’s time, usually after enough small wins have accumulated.

I was once asked what the difference was between the optimist and the pessimist. After being unable to give a clear answer I was advised (slightly tongue in cheek) that the answer was nothing. There is no difference except that the optimist will have a much better time getting to the destination than the pessimist.

In my world, my paradigm of success is not the amount of money I can make in my business, it’s not the number for clients I can accumulate or the accolades I receive. Success for me can be found in the relationships I have, the interactions I go through each day, the conversations and activities I get to enjoy and the reward of knowing I’ve done my best at the end of the day.

My expectations are realistic. My reality is close behind them (I like to keep some ‘hard to achieve goals’ in place).

I’ve worked with some very ‘successful’ people throughout my working life and what I’ve come to realise is that those who have the relationships, the value in their actions and the daily satisfaction of aligning their expectations to their reality are far more inwardly happy, content and confident than those that have only achieved an outward success – money, position, title and accolades.

Just a point to note. This does not mean my goals are easy or my expectations are low, but my expectations are aligned to what I can reasonably achieve with the resources I have to hand. The steps I can take CAN be achieved through the knowledge, skill and behaviours I have at my disposal. I fully understand that some of my goals are at the very least going to be extremely challenging, but I am willing to put the work in and count down the milestones towards success.

I mentioned before that I have trained in martial arts since the age of 8. I have always been physical, flexible, strong, coordinated and strong of mind. I’m willing to put the hard work in. I have boxed at a decent level, fought in full contact and competed at world level. I hold more than one Blackbelt and have coached national champions. 8 or 9 years ago I started on a new martial arts journey in Brazilian Jiu-Jitsu. BJJ differs from most other martial arts in that through effective grappling (sparring) it is fully tested, that’s why it found so much success in MMA and especially the UFC. If I train in a more traditional martial art that relies on striking it can be difficult to truly fight at 100% every training session without receiving frequent injury. I could not, for example, turn up to work and present to a large audience with a black eye or split lip. It just wouldn’t be professional. However, in BJJ I CAN train 100% with minimal chance of injury and therefore the techniques are tested to a higher level and the practitioners are able to apply them more effectively.

I started this journey at 40 years of age having already had 4 knee operations and being unable to even kneel properly. Throughout my journey I have had to deal with 3 further knee operations (the last one being a Total Knee Replacement) and the subsequent rehabilitation. I continue to set myself small achievable goals that when put together will eventually lead to my Blackbelt. These small steps included simply just turning up even when I couldn’t train, sitting out the parts I could not do, changing my game to fit my physical abilities, dealing with the fact that at times I cannot deal with the 25 year old semi-professional MMA fighter who I may be paired up with. 9 years on I can truly say that I have, even with the setbacks, enjoyed and learned from every stage of this current journey.

Expectations over reality = success in life.

Thank you for reading

Back to all blog posts