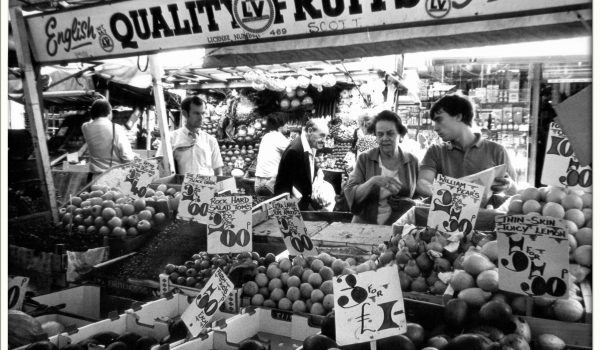 I started my sales ‘career’ at the age of 12. Accompanying my Dad at weekends and school holidays to his fruit and vegetable stall in the West End of London. I didn’t realise it at the time, but spending that time with him, generating an income for his family, would stay with me until this day. The lessons I learned in the pragmatic approach of ‘going to market’, though sometimes in a different form, are still embedded in the core of my activity now.

My Dad would wake me up around about 3am, and dreary eyed, we would get into his van and takes ourselves off to Covent Garden fruit and veg wholesale market. This was the New Covent Garden, purpose built wholesale market, whereas a young boy I would be greeted by a cacophony of early morning activity. Lorries and vans shuffling for position, produce being delivered then taken away, traders looking for the best deals and the right produce for their outlet.

The first lesson I learned here is about pricing. Many years later, working in and running automotive dealerships, I would often be confronted with the phrase “what’s your best price?”. Now, although this may seem a simple question, the answer can be very complex, I mean, the best price to whom? To the customer? To the business? And even these two answers can vary depending on the time, location, availability of similar produce elsewhere…. The ability to ensure each trader acquires or sells the produce for the ‘right’ price for them, at that time, is and always will be the determining factor in a trader’s success.
Here’s an example:

One particularly grim Saturday morning my dad, on his tour of the wholesale market spotted a pile of orange boxes at the back of a wholesaler’s pitch, enquiring on the price he was told £2.50 a box. This, to me, seemed like good value. Yes, they were a few days beyond their expiration and would need sorting through to remove the mouldy ones, but there’d be some good produce in there for sure. Pulling a disgusted face, we walked on. Before leaving for the market my dad made sure we walked past that same wholesaler on the way out. The difference now was that it was an hour and a half later, most of the traders had been and gone and the wholesalers was coming to a close for the day. Asking for the price again my dad was told £1.50 a box. These were usually somewhere near £10 a box, so a really cheap price. But no, disgusted face was once again pulled and we walked on.

We started to load the van ‘slowly’ under my old man’s instructions and within 15 minutes or so the trader appeared next to our van. “Listen mate, I’m not gonna short these today and they’ll be in the skip tomorrow, give me 50p a box and they are yours.” The deal was done and I was left to load 35 boxes of oranges.

We drove to Brewer Street in London’s West End to where the lock up was situated and instead of me helping my old man to pull out the stalls and set up the display for the day, he left me in the lock up to sort through the boxes of oranges. This was a horrendous task, as once oranges start to turn, they grow a special kind of green, puffy mould around them, which after only a short while leaves your hands sticky, stinking and just very unpleasant. However, 3 hours later I had managed to sort through, find and repack just a little short of 22 boxes of decent oranges. Now the original oranges would have normally cost around £350.00. We had purchased them for £17.50. The ‘stock’ now representing a potential value of £220.00 at wholesale price.

I loaded them up on the cart and started to take them up to the stallion Berwick Street Market, Soho’s famous market, and proceeded to create a large display next to the stall. My Dad priced them up approx 30% cheaper than the other oranges being offered throughout the market and we managed to clear most of the stock by the middle of the afternoon.

The morale of this tale? Simple, yet complex. “Buy right to sell right” -Sounds easy right? But let’s think about some of the requirements to do this. Firstly, my old man spent a lot of time trawling the wholesalers market, reviewing what was on offer, watching who was buying what, chatting to other traders to find out what was selling well in their area and what wasn’t selling well. He spent time building relationships with the wholesalers so they would hold stock for him, good for his word to pay right and pay prompt. In simple terms he knew his supply chain inside out.
Secondly, he would spend time talking, building relationships and reviewing what his competition were selling on the same street as him. He watched where the customers went, observing what they’d already bought and gaining an understanding of what they were happy to spend. He knew his competition well.

Thirdly, he spent time selecting, preparing and presenting his stock, or as he called it, his ‘show’. He once told me that although the market can be a busy place, it only takes 3 seconds for someone to walk straight past then all your efforts are wasted. If you can get them to stop and look you have a chance, once they look, get them to touch (pick the fruit up, inspect it, etc) often he’d offer a sample to taste. As soon as a customer engaged he would chat, smile, engage and make them feel welcome as he knew he was also part of the ‘show’.

Lastly, he made the buying process easy. Back then everything was sold on weight and prices displayed as a price per LB. We weighed the produce on scales and so the price was always different. Recognising this I’d often hear him ask “how many people are you feeding?”, “what is it you’re making?”, “how much did you want to spend?”

To this day a member of my father’s family is present in Berwick Street Market (my uncle). He has stood on the same corner with cousins, nephews and sons around him plying his trade. Always making a living regardless of Boom or Recession. 6 days a week ‘Going to Market’.

I now work in a modern industry dealing with complex marketing programmes, routes to market, sales channels, buyer behaviours, demographics, etc, etc, but I always fall back on that experience. My Dad would spend £1500 a week on produce that would rot in 4-5 days. He would take that produce to a street in London and set up his stall next door to 35-40 other guys doing exactly the same thing. He would then spend all day shouting about his produce, trying to capture the look, the stop, the engagement.

For me this is the purest and yet most complex form of marketing – literally “going to market’.

One thought on “Going to Market”